GST – Anti-profiteering becomes a board issue

Anti-profiteering under the goods and services tax has gone from being a plain costing issue to one that’s worrying board members. Several directors have written to company CFOs and finance teams seeking an update on price reductions under GST,
said people aware of the matter.

After rate reductions in this month, the government especially has been actively pushing companies to pass on the benefits of GST, and directors don’t want their companies to get caught up in complaints on this score with the anti-profiteering authority about to be established, experts said. On the other hand, they are also concerned about maintaining profitability.

Central Board of Excise and Customs (CBEC) chairperson Vanaja Sarna recently wrote to about 100 consumer goods companies regarding GST benefits being passed on to consumers. Directors in most of these companies are asking for updates on anti profiteering, said the people cited above. Some of the queries are also being directed at tax advisors.

“Anti-profiteering has become a board issue, subsequent to the letter from CBEC,” said Sachin Menon, national head, indirect tax, KPMG India. “The basic question is what will be the benchmark price that companies must take, on the basis of which reduction has to be applied.”

Tax experts said companies are also concerned about profitability. While some companies have already announced by how much prices would be slashed, it’s just beginning of a complex pricing exercise, they said.

“While passing on rate reductions to end customers is a complex task in itself, considering the specific supply chain and pricing aspects that are relevant to a business, determining input tax credits that are required to be passed on is a very intricate exercise requiring significant cost accounting expertise,” said MS Mani, partner, Deloitte India.

India’s biggest fast-moving consumer goods (FMCG) including Hindustan Unilever, Proctor and Gamble, Marico, Dabur and Mondelez told ET they have already passed on the benefits of GST by either slashing the maximum retail price (MRP) or by increasing grammage. 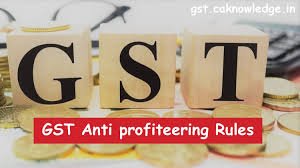 Insiders said many boards are planning to discuss anti-profiteering at upcoming meetings, with CFOs and tax advisors asked to make presentations along with the latest updates.

“Many companies require external assistance in order to prepare a report card documenting the steps taken and outcomes achieved in order to comply with the anti-profiteering regulations,” said MS Mani, partner, Deloitte India.

FMCG companies, especially listed ones, need to balance the expectations of investors and consumers, experts said. While being penalized for profiteering is a risk, not able to show healthy margins could backfire on the company’s stock.

“The problem for several companies is maintaining a balance between price reductions and profitability,” said an independent director with one of the companies. “It’s a reputation risk if tomorrow the government pulls up the company but if margins dip, it could reflect on investor sentiment.”

Most companies are conducting extensive product-wise analysis, having cut prices to avoid being on the wrong side of the law, said tax experts. This is mainly because there is no mechanism to estimate anti-profiteering and whether companies can deduct compliance costs from the benefits they derive from GST rate cuts.

“Most products will have fluctuating price lines depending on the season/discounts during a year,” said Menon of KPMG India. “Though boards want to adhere to anti-profiteering norms, the costing is turning out to be a nightmare for most companies as there are no parameters as to how such a complex calculation–for example, product level or entity level–could be carried out.”

As it stands today, anti-profiteering mostly mandates companies to pass on benefits derived from input tax credits or output tax due to GST to consumers. The focus of the exercise is currently on companies that directly impact consumers and not passing on benefits ofGST, which could trigger inflation going ahead.