Taking an advance? Do you have to pay GST?

Recently, the GST on Advances has become of quite an importance. The government has made few changes regarding the applicability of GST on advances. Background: let’s start from the initial stage as it was stated in CGST Act. According to the act, every registered person was required to pay GST on the advance monies received.

After few recommendations from various industries, the government came out with a solution. As per the notification no. 40/2017-Central Tax dated 13th October 2017, following person shall pay tax only at the time of issuing an invoice.

i) Registered person who has not opted for composition scheme, and 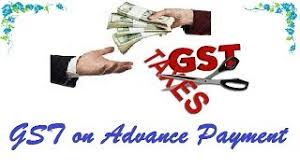 Conclusion: At this juncture, after all, notifications, the law stands as follows:

1. For an Outward supply of goods:

a) From 1st July 2017 until 12th October: All registered person supplying goods are liable to pay GST in advance received on goods.

b) From 13th October 2017 until 14th November 2017: the Registered person who are not composition dealers and whose turnover for the preceding year or for current year does not exceed 1.5 crores rupees person shall pay tax only at the time of issuing an invoice. Others shall pay GST on advances, including service providers.

c) From 15th November 2017 onwards: All registered person supplying goods shall pay tax only at the time of issuing an invoice.

2. For an Outward supply of services: The suppliers of services are liable to the payment of GST in advance received for services. There is no exemption for them.