GST bills have been passed by Lok Sabha as well as Rajya Sabha. It is very likely that the law would get implemented from 1st July 2017 unless there is strong resistance from trade and others on account of time required for preparation. Mainly due to changes required in information technology systems. It is important for businessmen to understand the impact of GST on their business. Anti-profiteering clause is one important aspect which needs to be understood at this stage which could have impact on pricing structure.

Section 171 of CGST Bill 2017 enables the central government to constitute an authority to examine if input tax credit availed by any registered person or the reduction in tax rate have actually resulted in commensurate reduction in price of goods or services supplied. Even the transitional provisions in CGST bill requires the registered person to pass on the benefit of extra credits by way of reduction in prices. However, we need to wait and see how fast government can constitute authority to monitor this clause.

Even in India, this clause could pose lot of practical challenges. The prices of goods or services may see rise before implementation of GST to avoid any impact during transition to GST regime. Quantification of benefits to be passed on would be practically very difficult. Such a provision could have been avoided as India is a growing market with lot of competition. Businessmen would love to reduce the price of goods or services to increase their market share. In fact, many entities are operating in loss by offering goods or services at lesser than cost. 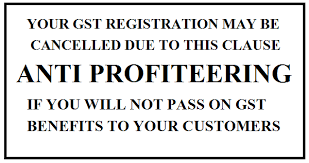 Proper guidelines need to be issued for implementation and monitoring of anti-profiteering clause. Otherwise, this clause could lead to increase in corruption as well where revenue department misuses it. Industry could also make representation to abolish the provision or issue guidelines wherein businessmen should have liberty to prove anti-profiteering on business verticals or division level and not on product level. He should not be harassed for earning profits, if any, due to other business factors.

We should also hope that this clause is made applicable only during transitional phase as intention could be to curb inflation during transition to GST law. Revenue Secretary Hasmukh Adhia also recently confirmed to this view and stated that only based on complaints action would be taken in this regard.

Conclusion: Professionals need to educate the businessmen about this danger and guide on steps to be taken to track additional credits or benefit of reduced tax rates. This requires detailed analysis of pricing pattern and factors considered. Government would not be empowered to question rise in price of goods or services on account of factors such as price of goods, demand from customers, increase in labour cost, change in policies etc. A detailed GST impact study could mitigate the future issues.