The track record is widely used as the starting point to evaluate the performance of mutual funds. Generally, historical performance is measured across time periods, ranging from 1- 10 years and funds are ranked based on their performance over a defined period. 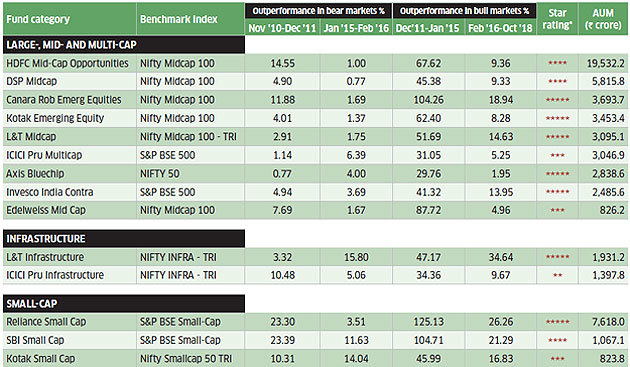 We analyzed 431 equity mutual funds across various categories—ELSS, equity diversified funds, value funds, thematic and sector funds. We considered regular, growth plans of schemes across the aforementioned categories and calculated point-to-point returns of the funds and their benchmark indices during the defined bull and bear phases. The funds that have comprehensively outperformed their benchmarks in the last two bear and bull phases were filtered out.

We put an additional filter by looking at the funds that have outperformed their total returns index (TRI) from 1 February 2018 to 8
October 2018. TRI takes into account the impact of dividends and therefore, gives a clearer picture of the actual returns.

Only 18 funds passed through the filters of bull and bear phases and TRI returns. After removing funds with a corpus of less than Rs 500 crore, we were left with just 14 funds. The consistency of these funds’ out-performance shows that they are more suitable for long-term wealth creation compared to peers.