Exporters to get GST refund in bank account filed with customs

The government has decided to give GST refund to exporters in the bank accounts they have filed with the customs department and not in those they have mentioned in the GST registration forms.

The Central Board of Excise and Customs (CBEC) said it has asked exporters to align with the bank account details declared to the customs with that of GST regime.

Under the GST rules, refund is to be credited in the bank account mentioned in the registration particulars. Besides, exporters have been declaring details of bank account to customs authorities for the purpose of drawback etc.

The CBEC said that there is a possibility that bank account details available with the customs department do not match with those declared in the GST registration form.

“In order to ensure smooth processing and payment of refund of IGST paid on exported goods, it has been decided that said refund amount shall be credited to the bank account of the exporter registered with customs even if it is different from the bank account of the applicant mentioned in his registration particulars,” the CBEC said.

Revenue Secretary had earlier this week said that the government will clear pending GST refunds of exporters by November-end. Over July-August, an estimated Rs 67,000 crore has accumulated as the Integrated GST (IGST), of which only about Rs 5,000-10,000 crore will be due as refunds to exporters. 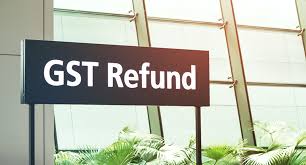 Exporters have to fill Table 6A while filing GSTR-1 for July,August and September for claiming the refunds,

The Goods and Services Tax (GST), the amalgamation of over a dozen indirect taxes like excise duty and VAT, does not provide for any exemption, and so exporters are required to first pay Integrated-GST (IGST) on manufactured goods and claim refunds after exporting them. This had put severe liquidity crunch, particularly on aggregators.

To ease their problems, the GST Council last week decided a package for them that includes extending the Advance Authorisation / Export Promotion Capital Goods (EPCG) / 100 per cent EOU (Export Oriented Unit) schemes to sourcing inputs from abroad as well as domestic suppliers till March 31, thus not requiring to pay IGST.