Valuation rules under GST could lead to transfer pricing disputes

As companies focus on the country’s biggest indirect tax reform — Goods and Services Tax — an old ghost of transfer pricing may come to haunt them in the coming years, warn tax experts.

Transfer pricing is a price charged by a subsidiary or a division of a company to another. The rules suggest that there has to be an ‘arm’s length’ while fixing this price so that it’s not too low or too high than the existing open market prices. Tax officers can question and demand tax in case they suspect that companies are escaping taxes.

Unlike the earlier tax regime, GST has something called an open market pricing for related party transactions. Many tax experts feel that currently, the valuation rules under GST and those for calculating transfer pricing are not harmonized, and this could lead to future tax demands.

Due to open market pricing for the related party transactions, goods and services, whether cross border or domestic, would now be subject to specific valuation rules.

There is still some confusion around whether the determination of open market pricing will be done based on the existing TP mechanism or whether different valuation rules would be framed, say tax experts. “Open market value may be required to be determined, although the current GST rules provide that where recipient unit is eligible for full credit, the value declared in the invoice shall be deemed to be open market value.

The question is how to accommodate the timebased sensitivities of the transaction specific indirect taxes with the annualised pricing determinations of the income tax,” said Rakesh Nangia, managing partner of Nangia and Co.

Transfer pricing disputes are mainly related to the calculation of profit made by MNCs and how they have been shifted to their parent companies. Many firms have gone to court, challenging the government’s transfer pricing calculations.

Experts point out that indirect taxes are more time-specific — like time of supply is crucial –– and figures in valuation as well. Direct taxes work on the principle of aggregation — mainly based on the due date of annual tax return. Tax experts point out that it is possible  that the same result can be reached under both tax systems with different approaches. “But harmony is not assured,” said a tax expert. 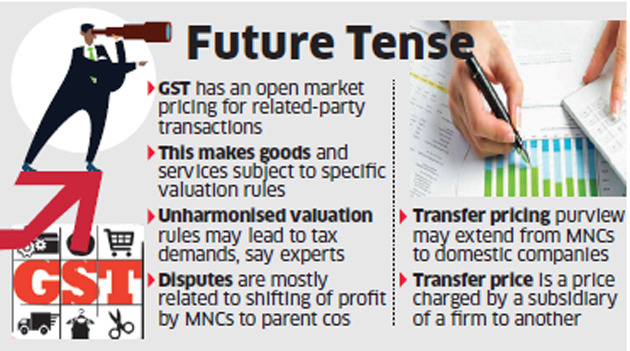 While broader principles of valuations under GST have been announced, the precise rules are yet to be decided.

An APA is mainly an agreement between a tax payer – mostly multinationals — and the tax authority — CBDT in India’s case — where the transfer pricing methodology is determined. The methodology to calculate taxes could then be used for an agreed period of time on the tax payer’s future international transactions.

While transfer pricing until now was only limited to multinationals, recent changes in the tax laws would mean domestic transactions would also come under its purview.

With GST framework too dishing out valuation regulations for domestic transactions between related parties, tax experts fear that transfer pricing may find its way into several domestic situations.