Use ITR-2 to show salary and capital gains income

Which income tax (I-T) form will be used for a salaried person if there is income from capital gains. Can we e-file the ITR? Checking Google, I gathered I should file ITR-2. But on choosing e-filing option, it shows ITR-1 and ITR-4.

An assessee having income under the heads income from salary and capital gains is required to file his return of income in ITR-2 for AY 2017-18. You will be required to prepare your return of income offline using ITR-2 utility (JavaExcel) available on the eFiling portal of income-tax department; generate xml file and upload it. Only the ITR 1 and 4 can be prepared and submitted online.

I retired from a PSU on November 30, 2015, and final settlement of my dues was done in May 2017. I have received a tax notice on July 24, 2017, asking about deductions claimed under section 80C, 80D, 80GG and 80TTA. If I do not reply and upload necessary documents in support of my claims, the amount will be taxed. For FY16-17, I have given details of tuition fees and NSC (80C), rent (80GG), mediclaim (80D) and savings from saving bank ac (80TTA). How do I upload the documents? According to the department. I should choose the e-assessment proceeding menu but it says “No Record Found“. What should I do? -SWARUP DAS 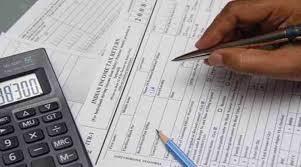 The notice dated July 24, 2017, apparently related to AY 2016-17. You have submitted the details for FY 2016-17 irrelevant to AY 2017- 18. As a part of e-governance initiative to facilitate conduct of assessment proceedings electronically, the income-tax department has launched the “e-proceeding“ facility wherein assessee will be able to submit the response along with the attachments by uploading the same on the e-filing por tal.

However, in cases where the assessee has received the notice asking him to electronically file the response, the e-proceedings menu is not activated on the e-filing portal, it is advisable that the assessee shall approach the assessing officer with the response and the supporting documents for AY 2016-17 to avoid non-compliance on the date of hearing. The assessee may also electronically file his response once the e-proceedings menu is activated.