Government of India has announced that the Sovereign Gold Bonds 2016 – Series I  will be open for subscription from July 18, 2016 to July 22, 2016. and it has with prior notice, close the Scheme before the specified period. The terms and conditions of the issuance of the Bonds shall be as under:

1. who is Eligible for Investment:

3. when it will be Issue

4. Denomination in units of one gram of gold and multiple

The Bonds shall be denominated in units of one gram of gold and multiples thereof. Minimum investment in the Bonds shall be one gram with a maximum limit of subscription of five hundred grams per person per fiscal year (April – March).

5. what is the Issue Price

Price of the Bonds shall be fixed in Indian Rupees on the basis of simple average of closing price of gold of 999 purity published by the India Bullion and Jewellers Association Limited for the week (Monday to Friday) preceding the subscription period.

The Bonds shall bear interest at the rate of 2.75 percent (fixed rate) per annum on the amount of initial investment. Interest shall be paid in half-yearly rests and the last interest shall be payable on maturity along with the principal.

Payment shall be accepted in Indian Rupees through Cash up to a maximum of Rs.20,000/- or Demand Drafts or Cheque or Electronic banking. Where payment is made through cheque or demand draft, the same shall be drawn in favour of receiving office.

i) The Bonds shall be repayable on the expiration of eight years from August 5, 2016, the date of issue of Gold bonds. Pre-mature redemption of the Bond is permitted from fifth year of the date of issue on the interest payment dates.

ii) The redemption price shall be fixed in Indian Rupees on the basis of the previous week’s (Monday – Friday) simple average closing price for gold of 999 purity, published by IBJA.

iii) The receiving office shall inform the investor of the date of maturity of the Gold Bond one month before its maturity.

The receiving office shall inform the investor of the date of maturity of the Bond one month before its maturity.

Investment in the Bonds shall be eligible for SLR.

The Bonds may be used as collateral for loans. The Loan to Value ratio will be as applicable to ordinary gold loan mandated by the RBI from time to time. The lien on the Bonds shall be marked in the depository by the authorized banks.

Interest on Gold Bonds will be taxable as per the provisions of the Income-tax Act, 1961. The capital gains tax arising on redemption of SGB to an individual has been exempted. The indexation benefits will be provided to long term capital gains arising to any person on transfer of bond

Subscription for the Bonds may be made in the prescribed application form (Form ‘A’) or in any other form as near as thereto stating clearly the grams of gold and the full name and address of the applicant. The receiving office shall issue an acknowledgment receipt in Form ‘B’ to the applicant.

The Bonds shall be eligible for trading from such date as may be notified by the Reserve Bank of India.

Commission for distribution shall be paid at the rate of rupee one per hundred of the total subscription received by the receiving offices on the applications received and receiving offices shall share at least 50% of the commission so received with the agents or sub-agents for the business procured through them.

19. All other terms and conditions specified in the notification of Government of India in the Ministry of Finance (Department of Economic Affairs) vide number F. No.4(13) W&M/2008, dated 8th October 2008 shall apply to this scheme.

Issue price decided by the Government is 3119/- per gms 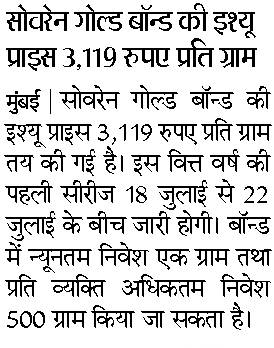