Non Performing Assets – Whose Loss it is?

Let’s put some thoughts on this and see where we can reach at the end of this discussion.

Non Performing Assets by definition is any assets which is not performing or not yielding the expected results.

Assume we have one tool where we invested to get the desired result but now this tool is of no use and we classify these as scrap and keep these items in our store (without letting it out to anyone) or put them for scrap sale (online/ offline /others) or gift these tools to someone in need. In this example, these ‘Tool’ is not giving desirable outcome and hence we classified this as non-performing. There may be variety of reasons why this tool is not working as expected, say:-

Technology Changes
Resource constraint
Change in Regulations
Erroneous Decision making
There will be lot of another reasons / excuses we are not using these tools. If we recall most of time these are due to wrong decision making and less often fall into other buckets.

Let’s see the impact of individual decision & impact on corporate.

Individuals who decided or practically not able to use the goods must make payments towards the goods and if these were purchased on borrowed funds he needs to pay it back to the lenders and ultimately, he is responsible to make it good to the others since he took the decision. If he fails, his credit history/score gets impacted and he suffers for next couple of years and all the lenders put pressure on him to repay all his debts ASAP.

In the corporate world, groups create multiple legal entities and keep themselves away from Non-Performing companies to the extent it’s possible and once company operations become Non Performing Assets they continue to harvest the banking system for other category/pool of assets which are yielding results. Most leave the dead investment ‘As Is’ or may try to milk whatever is possible from these dead business operations. Their management team knows the outcomes or is now least interested to run these operations they try to make most of it and our banking system keep watching this and try to find out a way to say these assets will perform by new innovative ways like say loan restructuring or debt to equity conversion or similar / like method and don’t declare the assets as Non Performing Assets.

Once banks realized that this scheme is also not working and it’s time to declare NPA it’s too late for them to recover most of the money and take any revival plan.; just to share we have approximately 8-12% of total lending is declared as NPA’s and almost similar amount is stressed but not declared due to these restructuring. 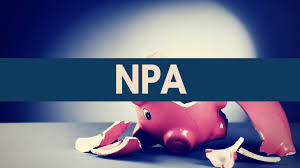 Large Groups: Groups had already milked these operations to the extent possible and though would be losing significantly on their investment in these operations will try to find means to negotiate with lenders; government for either bailout/ waiver / tax saving opportunities or something similar in the nonperforming operations or under performing operations; and continue to harvest these bankers for other operations (which is far different from case of normal individuals).

Banks: Banks will try to push higher interest rate on borrowings to small lenders ((almost 200 -300 basis points higher than large corporate) or lower interest payout on small saving or charging for services to the small honest account holder; just to remind all these services are mostly free for these large groups.

Nation: Country would be sitting on a pool of assets which can be used for generating revenue and employment along with other indirect benefits.