Borrowers should prepare more for their home and car loans in the months ahead as bank rates have changed course and are now on the way up. Private sector banks led by Axis Bank, Kotak Mahindra Bank, IndusInd Bank and Yes Bank have all hiked their benchmark marginal cost of funds based lending rate (MCLR) by 5 to 10 basis points effective from January.

Bank said this secular hike in rates, the first time since they moved to the new MCLR system in April 2016, is due to the higher price they are paying for deposits in the last month or so and rates are likely to remain elevated in the short term.

“Certificate of deposit rates have increased by 50 bps across all tenors. This hike reflects the current situation.

RBI has indicated that rates may not fall further and it looks that bank lending rates are also unlikely to go down from here for now,” Dipak Gupta, joint managing director, Kotak Mahindra Bank which has hiked rates by 5 to 10 basis points across tenures.

Banks have seven different tenors under MCLR ranging from overnight, one month, three months, six months, one year, two years and three years. Rates for all loans linked to MCLR will go up after this revision. RBI’s monetary policy committee voted 5-1 on December 6 to keep the policy rate on hold at 6% after inflation accelerated to a seven-month high.

This accompanied by uncertainties over government borrowing has led to a spike in government bond yields with the ten-year benchmark bond touching an 18-month high of 7.38% earlier this month. Yes Bank and IndusInd Bank have announced an increase of MCRL rates by 10 bps across all tenors effective January. Both banks said it is an indication of where interest rates are headed in the short term. 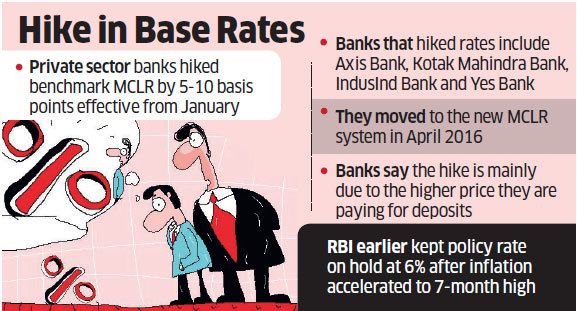 “Short-term rates are on the way up and it is difficult to predict interest rates especially as the market is reacting sharply. Change in our rates are just reflecting the market conditions currently,” said Rana Kapoor, CEO at Yes Bank.

IndusInd which also has raised its lending rates by 10 basis points across tenors said that rates are reflecting the direction of rates. “Our deposit rates have gone higher which is why we have had to adjust the lending rate. But we have to wait and watch whether this is here to stay,” said Arun Khurana, head of treasury at IndusInd Bank.