The income-tax department will in all likelihood go into overdrive in the next three months with the Central Board of Direct Taxes — the apex body — alerting all senior tax officials that their performance is being “monitored at the highest level.” It will also give a renewed push towards imposing and recovering tax on Rs 3 lakh crore deposit, which is suspected to be the quantum of Unexplained deposits parked with banks post demonetization.

“There will be searches, surveys, information verification, and follow-ups. Explanations on ‘cash in hand’ amounts are being sought from different kinds of assessees, and not just from large establishments and jewelers… We will be knocking on many doors even if our respective targets are met,” a senior tax officer told ET.

This was broadly the message conveyed by the CBDT chief during a recent video conference with tax officials.

According to another person in the department, direct tax offices in various circles may be required to go full steam due to a drop in GST collection following cut in tax rates and refunds.

Dispose of Appeals Before March 31

Till now many in the department were caught up with assessments pertaining to notices which were sent in September 2015 (for the financial year 2014-15) as these matters were getting time-barred in December 2017.

Now, tax officers have the time to focus on recovery till March 31. It causes a possibility of slowing the process of refund of income tax, directing the CIT Appeal to dispose of appeals confirming the additions, investigating cases, where assesses, have deposited more than Rs 10 lakh in demonetized notes may push up gross collection. But does this really reflect the true state of tax collection in a slowing economy where the GDP growth rate is admitted to have come down,” said senior chartered accountant Dilip Lakhani. 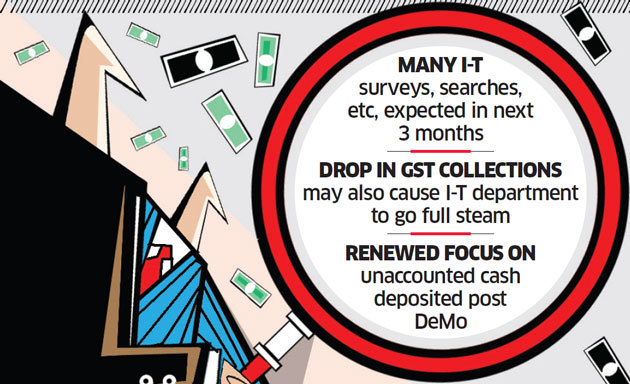 Tax authorities technically have the power to come down heavily on those who are unable to explain their cash deposit by slapping 60% tax and penalty – even though the process could take some time.

Sometime before the tax offices were directed to accept only those revised tax returns where there is a “bonafide inadvertent error” or “a mistake” on the part of the assessee. This was to tax the unaccounted cash that was deposited after demonetization (of high denomination currency bills in November 2016) and subsequently regularised through a revised return and payment of tax on it at the normal rate of 30%.

However, the communique to tax officers guidelines was only suggestive in nature as the law allows the filing of revised return due to various reasons including an intention to conceal income.