Leading brand of automobile companies including Maruti Suzuki, Bajaj Auto and Hyundai Motor India have agreed to absorb losses to GST load off dealers on inventories at their stockyards as the country transitions to goods and services tax.

automobile companies have sent to dealers promising financial support, the quantum of which depends on factors such as meeting sales target.

Dealers are expecting a loss of 2.5­5% of the basic price of inventory at their premises on July 1, the date set for the roll out of the new all ­encompassing indirect tax. Several levies that have already been paid on the vehicles lying at dealerships will not be refunded, as they aren’t GST­ creditable, but sales will have to be taxed under GST from next month.

Dealers are fearing that the loss to be Rs 1,000­3,000 per two­ wheeler and Rs 8,000­40,000 on each passenger car According to GST rules, a dealer cannot avail of input tax credit against the central sales tax, infrastructure cess, auto cess, entry tax which is not set­off against the local tax (levied in Madhya Pradesh, Chhattisgarh, Odisha and West Bengal) and local body tax in Maharashtra for stock landed in their stockyards before July. Input tax credit means that a firm can reduce the taxes it has paid on inputs from the taxes it has to deposit on output. In cumulative levy, input tax credit is 3­5%, depending on the state in which a vehicle is sold. 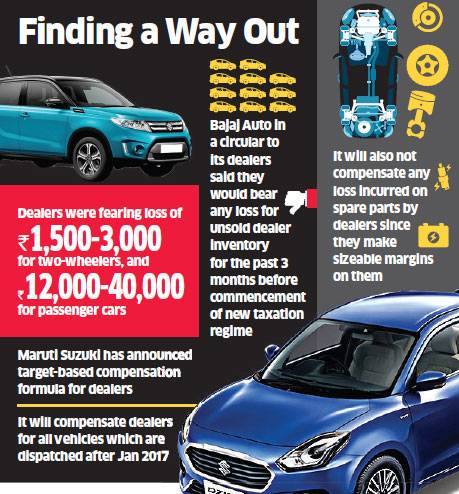 The strategy of each vehicle maker are different and quite innovative to deal with the loss of dealers, show their communication to dealers.

India’s largest car manufacturer , Maruti Suzuki, has come up with a target­based compensation formula for dealers.
It will compensate dealers for all vehicles which were dispatched after January 2017. Models such as the Vitara Brezza, Baleno and the New Dzire, which are currently in waiting period, are not included in the compensation formula as dealers will be able to liquidate the stock quite easily.

As per formula of Maruti’s, a dealer should sell at least 1.3 times his sales target to recover the entire loss incurred due to the tax transition. A dealer who will sell between 1.15 and 1.3 times of its target will get 85% of the loss reimbursed. Meeting the target means 75% reimbursement, and if missed no compensation.

Bajaj Auto, in a June 5 circular to dealers, said the company would bear any loss for unsold dealer inventory for three months before the commencement of new taxation regime. The support of company’s will be limited to unsold inventory only at the dealers end and will not be compensated for any vehicle sold by a dealer to asub­dealer. Bajaj Auto will also not reimburse any loss incurred on spare parts by dealers since they make sizeable margins on them.

The MD of one of big car makers Hyundai Motors India, wrote to dealers that the company would compensate the dealers for any loss occurred due to non ­credit of tax levied during invoicing, and shared a formula that will be followed to calculate the loss.Volkswagen adopted a different tack. The car maker its dealers to discontinue their regular stock till June 2017, which is typically one month. Thierry Lespiaucq, the German car maker’s India MD, wrote to dealers to focus on the sale of current stock.