Annual Return in FORM GSTR-9 and Reconciliation Statement in FORM GSTR-9C requires a registered person to disclose the Financial Year for which the said Forms are being filed. The concept of Financial Year although integral to Goods and Services Tax has not been defined under any of Acts under the GST law.

Financial Year is commonly understood as a period of twelve months commencing from the month of April of any year and ending by March of the subsequent year. Section 2(21) of the General Clauses Act also defines ‘financial year’ as the year commencing on the first day of April. The Income Tax Act, 1961 also follows the period of April to March as its financial year.

This is in line with the financial year followed by the Government of India which announces its fiscal budget for the period April to March every year. Thus, it would be safe to assume that ‘Financial Year’ though not specifically defined under the GST law would refer to a period of 12 months commencing from April and ending on March. 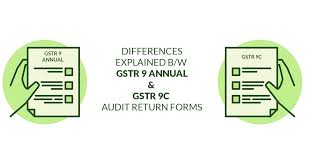 1. The concept of ‘Tax period’ and ‘Financial Year’

‘Tax Period’ has been defined in terms of section 2(106) of the CGST/ SGST Act, 2017, to mean the period for which the return is required to be furnished. Thus, the tax period under the GST law would either refer to a month or a quarter for taxable persons who are registered under a regular scheme or under the Composition Scheme as the case may be. Financial Year will comprise a number of tax periods. It is relevant to note that the assessment under the GST Act is done for the tax period and not for Financial Year.

2. Financial Year v. Accounting Year as per Books of Accounts

The Companies Act, 2013 defines ‘Financial Year’ to be the period ending on the 31st day of March every year. However, a company which is a holding, subsidiary or associate company of any company incorporated outside India which is required to follow a different accounting year for consolidation of its accounts may be allowed to follow any period as its accounting year, otherwise than a financial year.

Thus, certain companies may maintain their books of accounts for any period of 12 months (say, January to December) to align their books of accounts with the reporting requirements of respective holding, subsidiary or associate company incorporated outside India. In such instances, there may arise a question as to what could be the ‘Financial Year’ and the relevant turnover that is required to be declared in Annual Return in FORM GSTR-9 and Reconciliation Statement in FORM GSTR-9C.

3. Newly established business registered under GST in the midst of a financial year

For the period 2017-18, the financial year to be mentioned in FORM GSTR-9 and FORM GSTR-9C has to be 2017-18. Further, the registered person may mention that the period is from July 2017 to March 2018 for better understanding and clarity.

III. Conclusion: The ‘Financial Year’ for the purpose of Annual Return in FORM GSTR – 9 and Reconciliation Statement in FORM GSTR – 9C shall be commencing from April to March.