If you thought cash deposits made prior to November 8 last year — when the government announced its demonetization exercise will escape the eagle eye of the tax department, you would be mistaken.

Tax authorities have sought explanations related to deposits of cash made in FY11. Not only that, notices have also been sent to home buyers where the declared value of a purchase has been found much lower than the guidance, or indicative prices based on past transactions in the area.

A reassessment can be ordered if the tax authorities don’t receive a response or they don’t find the reply satisfactory.

“Cases on the basis of information available have been classified into two categories — high risk and low risk,” said a senior income tax official. “High-risk category cases have to be immediately attended to.”

Cases from FY11 will soon become time-barred owing to the statute of limitations, hence the rush, the official added. These have been classified as high priority and general queries have been issued.

The Income Tax department has asked these persons and enterprises to quote permanent account numbers as well as returns filed for the financial year in question. Tax authorities have the power of assessment or reassessment of any income chargeable to tax under Sections 147 and 148 of the Income Tax Act. 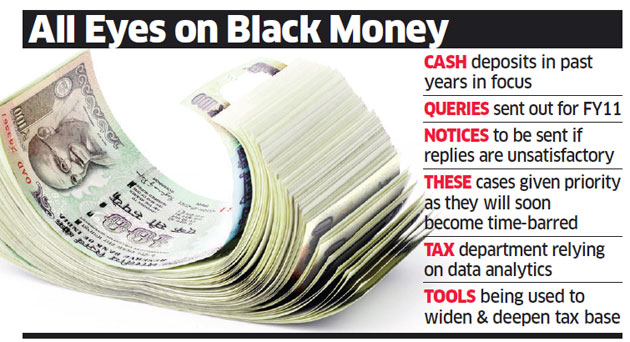 Formal notices will be issued if the explanation is found to be unsatisfactory. In the case of property transactions, the authorities have sought to add the difference between guidance value and the declared value to the assessed income. Their argument is that the difference would have been paid but hadn’t been declared, putting both seller and buyer under the scanner.

The income tax department is getting information from multiple sources including banks and financial institutions as part of its anti-black money drive aimed at nabbing tax evaders.

“This is a clear evidence of enhanced data mining capabilities of the tax department,” This kind of targeted approach would lead to widening of tax base and increase the tax collections.”