In its attempt to bring more companies under the goods and services tax (GST) umbrella, the tax department is planning to conduct Searches surveys under GST across the country.

The searches could start as early as next week and would focus on checking if any company was deliberately avoiding to come under GST umbrella or if there is a genuine problem, said the official. Tax officers would conduct physical verification of premises in several areas and check the GST certificates in cases where they have been issued.

The move comes about a week after a meeting of senior tax officials with Prime Minister and finance minister  in New Delhi.

“As you know that the government is working towards increasing the tax base,” the official said. “So we recently received directions that new registrations under GST have to be increased.

In that regard we will conduct surveys across the country to find out the eligible businesses that have still not registered with us. So our officers will be soon on field to get this moving.”

Industry insiders said many companies and businessmen, especially in some unorganized sectors, are deliberately avoiding to come under GST because they fear tax sleuths would go after their past unpaid taxes Experts welcomed the government’s push to increase tax base but said it should not lead to harassment of people with genuine issues.

“I don’t see anything wrong with searches as it’s obvious that the government wants to expand the GST base and they want to come hard on people who are evading taxes,” said Pratik Jain, national leader -indirect tax, at PwC India. 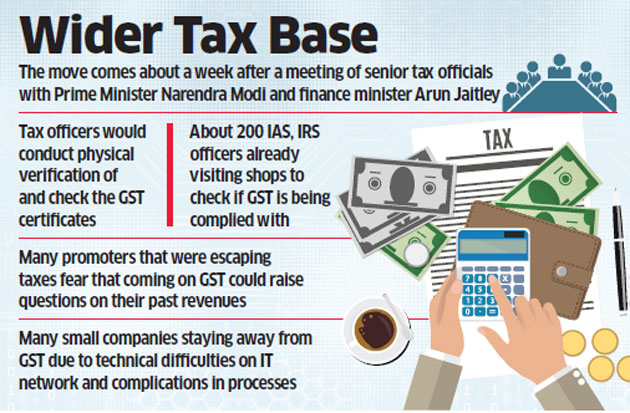 “But there should be some guidance by the GST Council in the form of a circular or instruction to ensure that there is no harassment at the ground level and officers differentiate between people evading taxes and genuine problems a company may be facing.

In Present senerio , tax officials would visit premises of several businesses, especially in the industrial areas. In some way, officers have already started doing this. As per report on July 8 that about 200 senior IAS, IRS and IFS officers have been asked to check if essential commodities are available across cities and small towns and if any noticeable price trends are visible.

These officials are going around in local markets from Vadodara in Gujarat and Mayurbhanj in Odisha to Rajouri in Jammu & Kashmir and Krishnagiri in Tamil Nadu to check whether GST is being implemented as intended. In one such incident, a cloth retailer in the National Capital Region was reportedly fined Rs 20,000 for selling shirts without paying GST on that.

“Such fines are required; there has to be some fear if anyone is breaking the law,” said a second tax officer aware of the development. “Some people have also found loopholes and are staying out of GST net.

The tax department’s renewed push comes weeks after the Haryana excise and taxation department asked its tax officers to conduct searches on companies in the state.

In a circular issued on August 10, the department mentioned eight points that tax officers have to follow along with a timeline for each process