Internet giant Google is forayed into the payment space in the country with the launch of a Google payment app Tez payment solution, called ‘Tez’ (fast).

In the morning, Google released the app on the Android as well as the Apple App store. The app allows users to do financial transactions like sending money, receiving payments directly into their bank accounts and paying bills.

Caesar Sengupta, VP, Next Billion Users, Google said that Tez is Google’s made for India payment product and payments will be an area where India will leapfrog the West. “Tez has been made for India and will make payments as simple as cash,” said Sengupta. Tez will be available in seven Indian languages including Bengali and Marathi.

Google has launched a feature called Cash Mode where one can pay without sharing bank details or phone number. The technology called audio QR Code works like Near Field Communication and uses ultrasound waved to connect two phones through the phone’s microphone and speaker. Google says its completely secure and uses UPI’s bank to bank transfer platform.

Rajan Anandan, vice president, South East Asia and India, Google said that there are 300 million people access internet on
smartphones today and India is embracing internet in way we could not have imagined before. “Over 650 million are expected to use Internet by 2020 and Google’s mission is to provide Internet for everyone,” said Anandan. 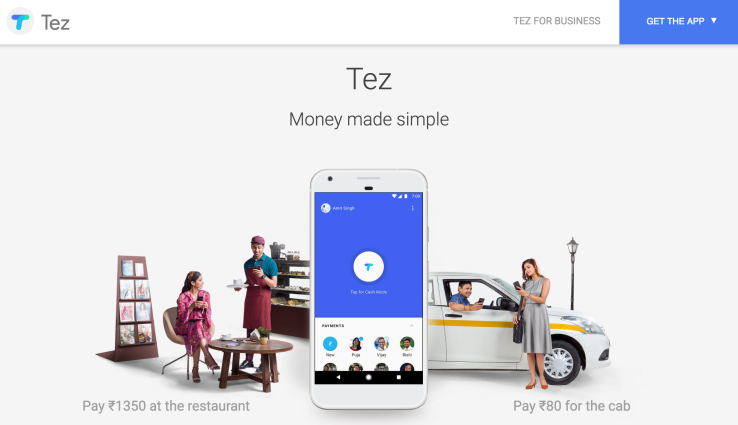 Digital payments have got a huge push post the government’s demonitisation exercise in November last year and according to
government estimates digital economy has the potential to go upto $1 trillion in the next few years. Over the last one year, the payment space in India has become very exciting with several large players foraying into it.

This includes the likes of Amazon, Flipkart and Uber which recently launched UPI payments through its app. Apple is also said to be working on a payments solution for India.

Google has also enabled merchants to use the Tez platform to receive payments directly through the app but promised only businesses that consumers transact with will be able to use the feature and there will be “no spamming.” Sengupta added that Google is also working on integrating credit and debit card payments through Tez and will enable it later this year.