After debating since the months, the government is now moving to make Permanent Account Number (PAN) the Aadhaar for business Aadhaar for companies as well as non-government organisations as it looks to close possible gaps for generation of black money.

The ministry of corporate affairs (MCA) has recentally proposed the amendments to the Income Tax Act as well as the Prevention of Money Laundering Act for the purpose and the government is looking at a mechanism under which any entity with cumulative transactions of over Rs 2 lakh annually will have to comply with the regulations.

While most of the businesses and NGOs have PAN, its use is mandatory for any cash transaction of over Rs 50,000 and for complying with know-your customer (KYC) norms in banks.

Amendments are just to check any possibility of misuse. During the discussions it has emerged that businesses will need to provide Aadhaar at the time of registration of companies and partnership firms, ensuring that individuals who are directors or promoters of these entities are easily tracked and floating so-called benami companies become tougher.

“The government may make it mandatory for key  person of the companies i.e managing directors and chief executives to submit Aadhaar but that’s something that will be done in the future. 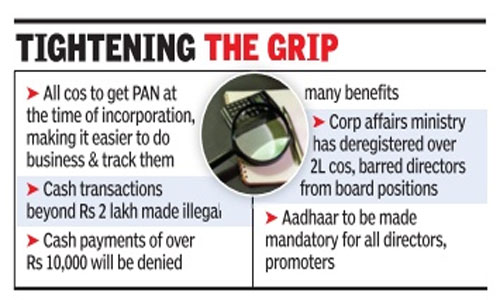 Ministry of corporate affairs has already moved to a system where a PAN is generated at the time of incorporation for companies , a process that the government claims takes less than 24 hours.

But partnership firms and trusts are not part of the process as they are handled state governments.Through the proposed amendments, all the entities would be brought on to the same plat form and it will be easier to track them.

The MCA had discussed various options including development of an Aadhaar type identity for businesses, an idea which was also discussed with the information technology ministry . But it has now opted for PAN. A some year before , the government had decided to treat PAN as the unique identification number for businesses, instead of generating multiple numbers for provident fund, tax and labour law related compliances.

The government has cracked down on companies at multiple levels, including identifying “shell companies“. While Sebi has already acted against listed companies, And MCA has cancelled registration of over two lakh defunct companies, which had not filed returns for years, while also cancelling the directorship of those on the boards of these entities.